What is integrative cancer care?

The main goals are to broaden the patient’s treatment options, to reduce side effects of toxic therapies, to increase treatment efficacy by a multi-pronged approach, and to empower patients to engage in their own treatment process. There are enormous strengths to both, conventional treatments and complementary approaches.

While conventional cancer treatments are usually focused on removing or killing cancer cells (cyto reduction), an integrative cancer treatment approach sees the cancerous tumor as a mere symptom of an underlying cancer disease, for which the root causes must be addressed. This includes changing the “terrain”, in which the cancer was allowed to develop, removing facilitating circumstances and drivers of cancer growth, and improving weak cancer immunity and overall health of a cancer patient. 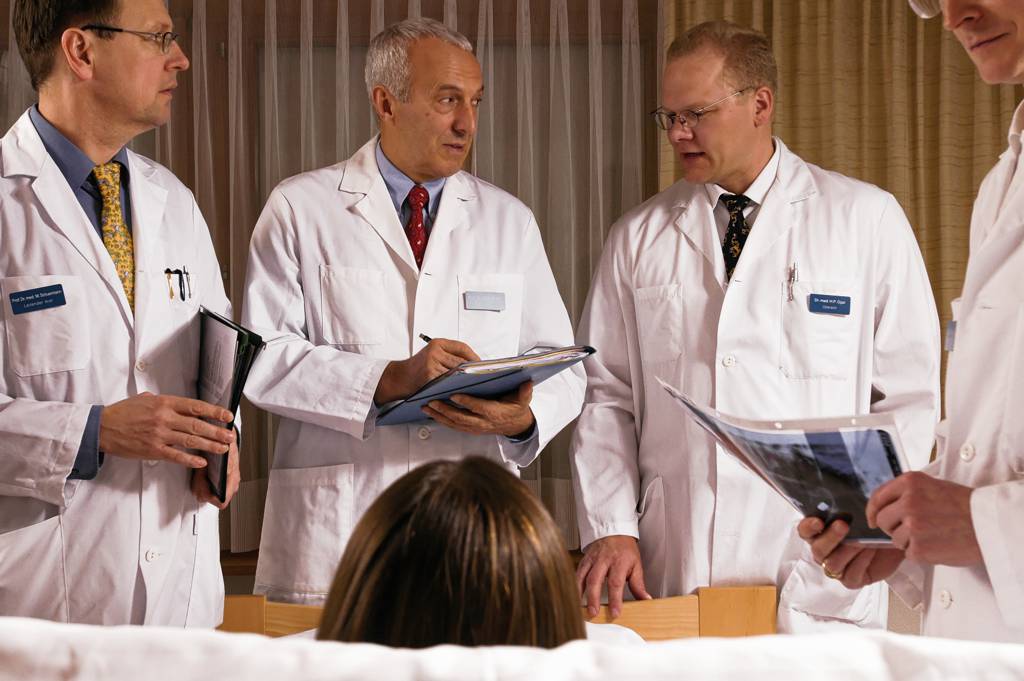 “Historically, it’s been an ‘either/or’ situation between conventional medicine and other approaches, which has often placed patients in an extremely difficult position at one of the most stressful points in their lives.” 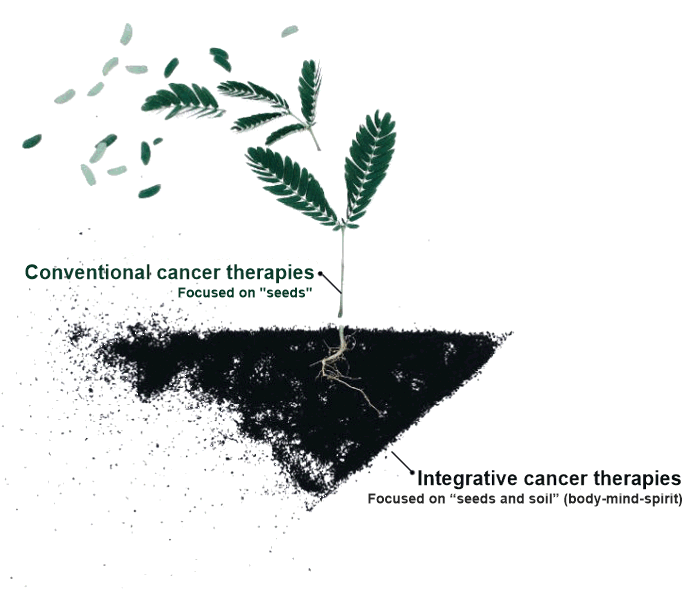 Integrative cancer treatments focus on both, the destruction of cancer cells (‘seeds’) and the fortification of the microenvironment or terrain (‘soil’) surrounding the cancerous lesions in the hope to create an unfavorable environment for cancer growth and heal the cancer disease on all levels – body, mind and spirit.

When the cancer disease is represented by a plant, the cancerous cells can be seen as the ‘seeds’, and the surrounding tissue (also called micro-environment or terrain) as the ‘soil’. Conventional cancer therapies are preoccupied with removing the ‘seeds’, while the integrative approach to cancer looks after the ‘seed and soil’. Real success in cancer treatment can only be achieved with a combined approach, namely removing all seeds, and healing the soil at the same time.

The “seed and soil” hypothesis, referred to in the metaphor, was first published by Stephen Paget in 1889 and still is recognized and widely accepted today. Since more than a century, we know that certain tumors exhibit a predilection for metastases to specific organs. This organ-preference pattern of tumor metastases formation is the result of highly specific interactions between metastatic tumor cells (the seeds) and the tissue microenvironment or terrain, in which cancer grows (the soil).

During the last century, we have observed an explosion in our cancer knowledge base, including the latest technological progress in gene sequencing and molecular profiling. An extensive collection of experimental research and clinical data is now revealing valuable details about the interactions between cancer cells and their microenvironment, consisting of stromal cells and the extracellular matrix. We know today that the fate of a metastatic cancer cell depends on its ability to trigger various homeostatic mechanisms in this tissue microenvironment, thereby promoting cell growth, cell survival, invasion of microenvironment, angiogenesis, and clonal expansion to form a metastasis.

Understanding those interactions will help us to target important molecules and/or pathways in the crosstalk between cancer cells and their microenvironment and hopefully lead to better strategies for prevention and treatment of metastatic disease which remains the major cause of cancer-related death today.

“There is a lot you can achieve by working with the person as a whole rather than just focusing on the symptoms.”

We aim to reduce suffering from cancer by:

Our core missions are:

We aim to reduce suffering from cancer by: 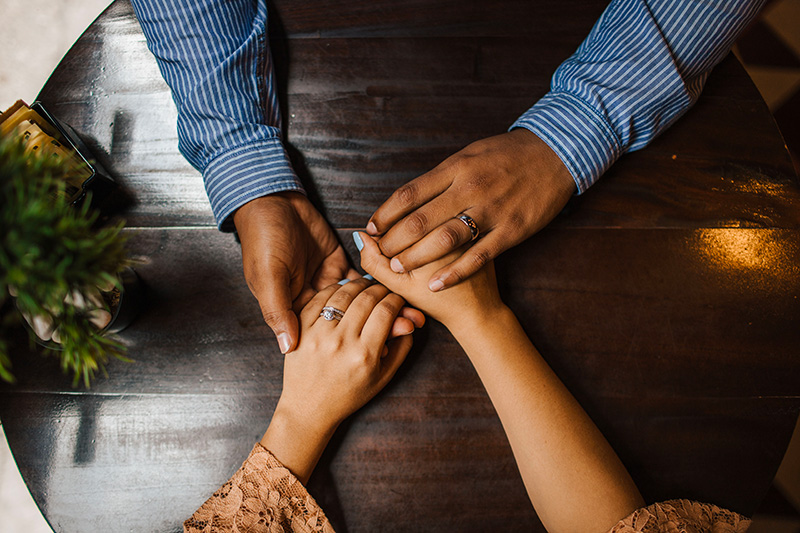 Our core missions are: 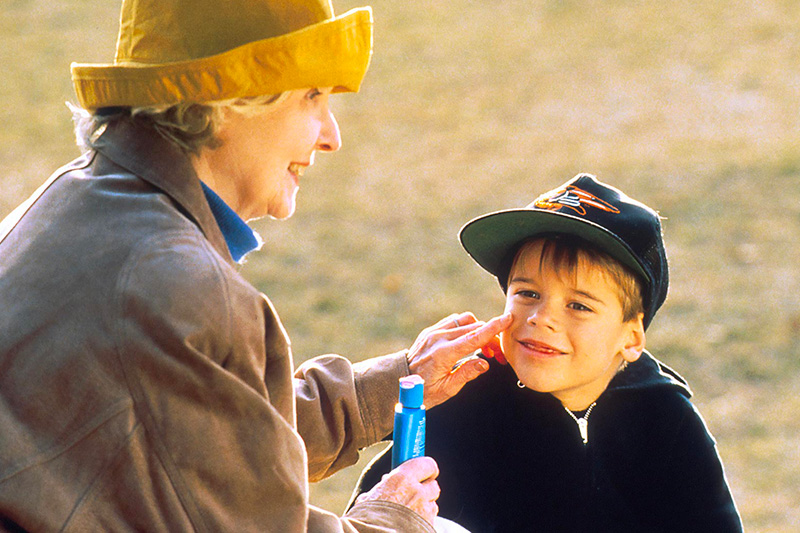 The cancer patient must always be in the middle of all interests. We strive to empower our patients to actively participate in decision-making at all stages of their cancer journey.

We provide the most accurate spectrum of options that suits our patients’ needs & their condition. Our patients will feel listened to at every step through their disease. Our team and complementary medicine specialists will offer their support wherever it is most needed.

While conventional cancer care only deals with the “seed”, meaning the visible tumor of the patient, our approach is integrating the “soil & the seed” in any treatment decision in order to also address possible contributing factors for cancer to develop.

Our evidence-based treatments focus on the body as a “whole”. We include body, mind and spirit treatment measures to improve our patient’s quality of life and do our best to increase their lifespan with good quality of life.

We always provide our patients with truthful, comprehensive, and independent information regarding their disease and the best, evidence-based treatment options for their specific situation. Honesty and transparency in this process is one of the main pillars of our integrative approach.

We go the extra mile for our patients, when it comes to researching the best treatment options. We believe this allows extra time and empowers our patients to make their decisions with peace of mind. We are fully committed to provide accurate information, not false hope.

Cancer disease is a chronic condition motivating scientists and medical doctors all over the world to develop new, effective solutions for treatment and cure of patients.

We do our best to stay on top of the full spectrum of leading-edge diagnostics and treatments available worldwide, so our cancer patients will not miss out on any chances.

A lack of knowledge can lead to poor decision making, which is why we consider research and innovation as a top priority in our approach.

SCHEDULE A CONSULTATION
OUR TEAM OF EXPERTS

Key facts about an integrative approach to cancer treatment

“With the proportion of cancers attributed to lifestyle ranging from 60% to well over 90%, depending on who you ask, there is no credible rationale for overlooking lifestyle approaches.”

“Around one third of deaths from cancer are due to the 5 leading behavioral and dietary risks: high body mass index, low fruit and vegetable intake, lack of physical activity, tobacco use, and alcohol use.”

“The number of US hospitals offering integrative therapies, such as acupuncture, massage therapy, therapeutic touch, and guided imagery, has increased from 8% in 1998 to 42% in 2010. Many academic cancer centers offer these integrative practices as part of a full spectrum of care. Other hospitals offer programs in integrative women’s health, cardiology, and pain management.”

“More and more patients seek integrative medicine practitioners. By 2007, approximately 40% of adult Americans and 12% of children were using some form of alternative therapies compared with 33% in 1991”

This website uses cookies to improve your experience while you navigate through the website. Out of these, the cookies that are categorized as necessary are stored on your browser as they are essential for the working of basic functionalities of the website. We also use third-party cookies that help us analyze and understand how you use this website. These cookies will be stored in your browser only with your consent. You also have the option to opt-out of these cookies. But opting out of some of these cookies may affect your browsing experience.
Necessary Always Enabled
Necessary cookies are absolutely essential for the website to function properly. These cookies ensure basic functionalities and security features of the website, anonymously.
Functional
Functional cookies help to perform certain functionalities like sharing the content of the website on social media platforms, collect feedbacks, and other third-party features.
Performance
Performance cookies are used to understand and analyze the key performance indexes of the website which helps in delivering a better user experience for the visitors.
Analytics
Analytical cookies are used to understand how visitors interact with the website. These cookies help provide information on metrics the number of visitors, bounce rate, traffic source, etc.
Advertisement
Advertisement cookies are used to provide visitors with relevant ads and marketing campaigns. These cookies track visitors across websites and collect information to provide customized ads.
Others
Other uncategorized cookies are those that are being analyzed and have not been classified into a category as yet.
SAVE & ACCEPT
Go to Top